Movement to Shift Determination Standard for Rights Restoration to “Unintentional” Standard is Accelerating!

1. Present Situation and Trends of Rights Restoration System in Japan

We have a system for restoring rights in which, when rights are lost following failure to comply with a time limit in the procedures listed below (see Table 1) under Japanese Patent Law, Utility Model Law, Design Law, and Trademark Law, the lost rights are restored.
However, the rate of grant of restoration is extremely lower (about 10 to 20%) in the current rights restoration system in Japan than in other countries, and it has been pointed out that the standard for determination is too strict. In addition, it has been mandatory to submit evidence documents to restore the lost rights, which places a heavy burden on the applicants, etc. In view of this, while revision of the rights restoration system has been being discussed, a cabinet decision was recently made on an amendment for relaxing requirements (on a proposed revision of the Patent Law, etc.). This proposed revision will be submitted to the Diet for deliberation, and is expected to be passed early. Following the passage of the proposed revision, concrete movements toward enforcement, such as formulation of the guidelines for operation, will accelerate.
Table 1 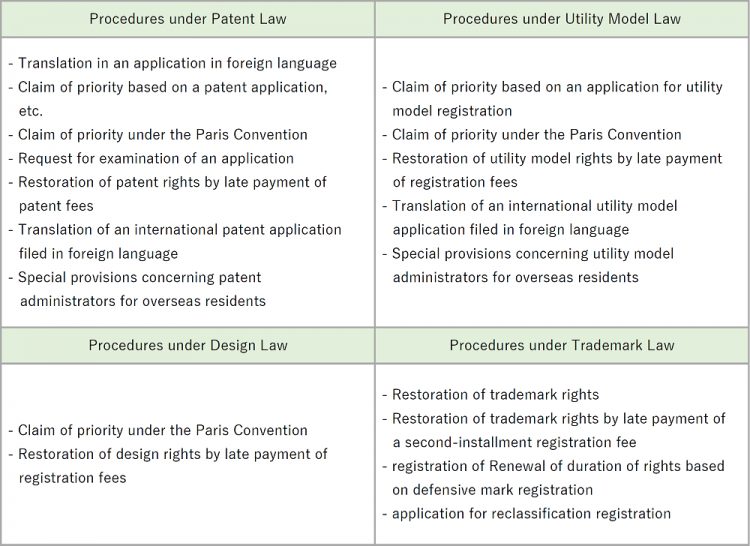 According to the JPO’s material disclosed in January of this year, they had been discussing shifting the standard for determination on restoration of rights from the “due diligence” standard to the “unintentional” standard for the purposes of increasing the rate of grant of restoration and reducing the burden on applicants and the administrative organ. Once such relaxation is realized, non-compliance with a time limit caused by human error, mistakes in procedural management, and the like could be a new target of relief.
The JPO’s material states that the maximum period for which restoration of rights is granted may be one year as it is.
It had been also discussed in the JPO to collect a considerable amount of fee for applying for restoration of rights to thereby prevent abuse of the system and provide incentive to comply with a time limit. On the other hand, the cabinet decision made it clear that certain fee exemption would be granted for the cases where the responsibility for non-compliance with a time limit should not be questioned (for example, if there is a reason such as a disaster or spread of infectious disease).

In the rights restoration system in Japan, the “due diligence” standard is adopted, and since it is strictly determined whether “due diligence” had been exercised, restoration is less likely to be granted than in other countries, which has been one of the causes to make it difficult to acquire rights in Japan. However, if and when the standard for determination in the rights restoration system is shifted to the “unintentional” standard, the range of relief is expected to greatly expand. We will keep an eye on when the revised laws will be enforced and on specific contents of the guidelines, etc. to be formulated.