The JPO has set up a JPO Policy Promotion Council to promote further improvement of the intellectual property legislations and released a report entitled “How the intellectual property system should be to promote use of intellectual properties – Summary-” on June 30, 2022. As we slightly introduced in our previous newsletter of October 3, 2022, this report suggests a necessity of deeper discussion about re-evaluation of stipulations related to the definition of “work” of a patent so that the definition of “work” conforms with modern days where AI and IoT are keystones of industrial development and where SaaS service available by downloading a program etc. to a user terminal from a server is increasing.
The Japanese Patent Act Article 2(3) stipulates definitions of types of “work” (acts evaluated as infringement if the acts are done by an unauthorized third party) of a patented invention.

The term “work” as used in this Act in respect of an invention means the following acts:
(i) if the invention is a product (including a computer program or anything equivalent; the same applies hereinafter): the act of producing or using it, transferring or leasing it (meaning transferring it or leasing it out; this includes providing it through a telecommunications line, if it is a computer program or anything equivalent; the same applies hereinafter), exporting or importing it, or offering to transfer or lease it (this includes displaying it for the purpose of transferring or leasing it; the same applies hereinafter)*.
((ii) and (iii) are omitted in this article)
*We will provide detailed information about “producing (production)” and “providing (provision) through a telecommunication line” written in red color above in relation to the SaaS service.
Even in a case where an SaaS service is structured for users (specifically, users’ terminals) in Japan, it is naturally assumed that the service supplier chooses to locate a part of or all of a program necessary to provide the SaaS service in a server placed outside of Japan.
If such a choice is made, even if there is a Japanese patent claiming such a program pertaining to the SaaS service, there may be a case where acts of “producing” and “providing through a telecommunication line (such as the Internet)” of the program cannot be evaluated as being completed within the territory of Japan.
If this happens, considering the principle of territorial jurisdiction of patent adopted in Japan, it is difficult to evaluate an act using a server located outside of Japan as an infringing act.
Considering such characteristics of SaaS services, a suggestion (posing of a problem) was made in the aforementioned report released by the JPO in this June that it should be clarified what cases should be evaluated as an infringement of a patent pertaining to an SaaS service from a point of view that the evaluation should conform with current situations.

(2) Third party opinion is invited for the first time in relation to one type of “work”, “production”

Currently, there is an ongoing proceedings of a suit for a patent infringement (Reiwa 4 (Ne) Case No. 10046) in the Japanese Intellectual Property High Court, one of the core issues of which is what we have introduced in the above (1).
In this suit (Plaintiff: Dwango Co., Ltd.; Defendant; FC2 et al.), the point of dispute is whether the system of the defendant is infringing the patented invention of “A comment distribution system including a server, and terminal devices connected to the server through a network” (JP6526304).
According to the description in JP6526304, the patented “comment distribution system” is a system “that allows playing of a video content and simultaneous communication between users by using the played video content”. More specifically, it is a system that allows users to share a video content and communicate with each other through comments by displaying the comments sent by the users through their terminals on the video content while the video content is played. 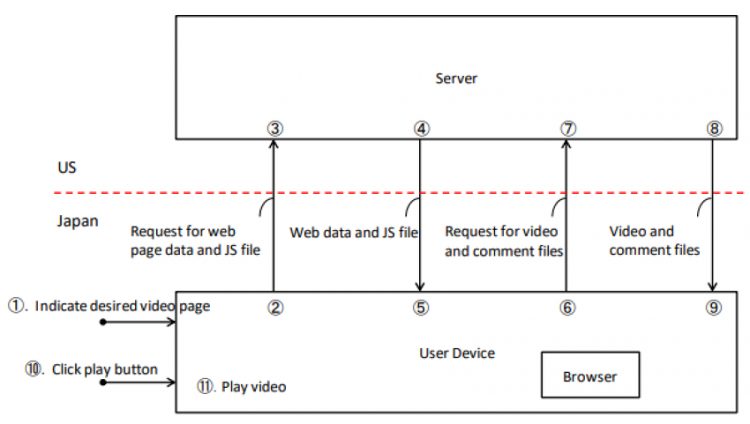 Drawing: Explanatory drawing showing the structure and operation of the defendant’s system (Reference: Website of the Japanese Intellectual Property High Court (English version (https://www.ip.courts.go.jp/eng/Guidelines_for_Proceedings/thirdparty/index.html))
The “server” and the “user device” of the defendant’s system shown in the drawing may be evaluated as corresponding to the “server” and the “user terminal” recited in the claim of the patented invention of the “comment distribution system”.
The problem here is that the “server” of the defendant’s system is located in the United States (outside of Japan) as shown as “US” in the drawing.
In other words, even if it is possible to evaluate that the defendant’s system which includes all of the element of the patented invention is “produced” (Patent Act Article 2(3)), it is the system including the “server” existing in the US and the “user device” existing in Japan that is “produced” in this case. Considering the principle of territorial jurisdiction of patent, it is therefore the point of dispute whether such defendant’s system can be evaluated as infringing a Japanese patent.
Decisions made in the proceedings concerning this point of dispute will largely effect not only this lawsuit but also decision makings of future patent infringement lawsuit pertaining to each and every SaaS service including its application in business and entertainment such as games.
The intellectual property high court therefore decided to invite third party opinions by November 30, 2022 to collect opinions widely from the general public about this point of dispute to appropriately make a judicial decision concerning this point of dispute. The decision making of the intellectual property high court on this point of dispute considering the third party opinions is receiving a great deal of attention.
The system of inviting the third party opinions is implemented on April 1, 2022 and is also called as the Japanese version of amicus curiae brief. This is the first Japanese patent infringement lawsuit that invites the third party opinions under this system.

(3) Decision of the intellectual property high court on July 20, 2022 in relation to one type of “work”, “providing through a telecommunication line”

It appears that the patent infringement lawsuit pertaining to the SaaS service introduced in the above (3) has been appealed to the Supreme Court.
According to a released record of conference on September 26, 2022, the patent system subcommittee, which conducts deliberations regarding necessities and other issues of revisions of the Patent Act in response to the request of advice by the Minister of Economy, Trade and Industry, seems to mainly carry out investigative researches on related matters that are necessary for deliberations on re-evaluation using a time period until about March of 2023 in response to the appeal, while placing re-evaluation of the definition of “work” as one agenda.
More specifically, the patent system subcommittee appears to be going to gather information related to changes to come in related lawsuits such as those we introduced in this article and information related to laws and ordinances and court precedents concerning the definition of “work” in other countries, as well as conducting hearings from business operators and concerned parties.
We will keep observing how the lawsuits we introduced in this article turn out and how the ultimate report from the patent system subcommittee turns out after referring to these lawsuits, as they will largely affect and determine the future patent strategies pertaining to SaaS services.
Edited by Keisaku Ishihara